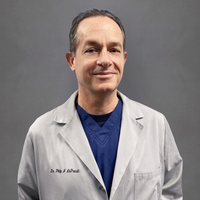 Please take a moment and let us know how your experience was.

Dr. Philip LoPresti DO is Board Certified in General Surgery since 1998. He Completed his training in General Surgery in Brooklyn Hospital Center, Brooklyn, NY. During this time he did a research fellowship at Memorial Sloan Kettering Cancer Center in the Department of Head and Neck at which time Dr. LoPresti had was involved in a publication in the Journal of Head and Neck and presented his research at the Head and Neck conference in Washington DC in 1996. He then went on to complete a fellowship in Trauma and Surgical Critical Care at UNDMJ.

Dr. LoPresti has been practicing in Queens County, NYC since 1998 and has been in the Forest Hills area since 2007. He was Director of Ambulatory Surgery at St. Johns Queens Hospital and was a Trauma Surgeon at Catholic Medical Centers of Brooklyn and Queens where he was also involved in the supervising and training of Residents.

Dr. LoPresti has interests in music, art, and travel and is currently advancing towards his pilot's license. He can converse in English, Italian, and Spanish. Dr. LoPresti is a member of the NYC Medical Reserve Corp and was a medical volunteer during the 911 attacks in NYC.

“My approach to patients is always individual. With this goal I can achieve the best possible outcome for my patients. And This is something I look forward to.”

Thank you for subscribing!

You will receive important news and updates from our practice directly to your inbox.