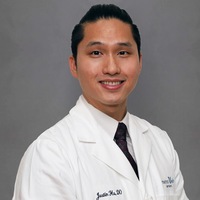 ROLE:
Physician and Vein Specialist
SPECIALTIES:
LANGUAGES:
WE CARE ABOUT YOUR FEEDBACK!

Please take a moment and let us know how your experience was.

Dr. Justin Ha, DO, is a primary care physician specializing in the treatment of venous disorders. He currently serves at Metro Vein Centers in New York City.

Dr. Ha obtained his bachelor’s degree in Biology from the University of Maryland and his Masters in Biomedical Sciences before earning his medical degree at the William Carey University College of Osteopathic Medicine. He subsequently completed his residency training at St. John's Episcopal Hospital in New York City. During his residency, Dr. Ha was involved in the education and training of medical students and residents with a focus in teaching ultrasound-guided vein procedures.

Dr. Ha is passionate about staying up-to-date in continued medical education for the treatment of advanced venous disorders in order to provide the best, evidence-based care for his patients. He is trained in the treatment of venous insufficiency using endovenous radiofrequency and laser ablations as well as ultrasound-guided sclerotherapy.

Dr. Ha believes that the best way to healthy living is to be proactive instead of reactive. “Early treatment allows us to prevent progression to severe, advanced disease. It’s easier to treat a cavity than it is to get a root canal.” He applies these preventative care principles in his practice of treating unhealthy veins

Thank you for subscribing!

You will receive important news and updates from our practice directly to your inbox.